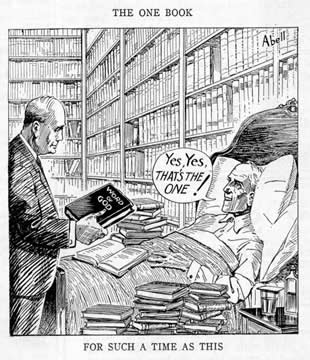 The Bible is here. You must account for it in one or two ways: either man wrote it or God. How did the Bible get here? Before you were the Bible was, and after you are gone the Bible will be! Man oft condemns himself by condemning the Bible, without studying the Bible. This is absolutely certain: the more Bible there is in your life the better will be your life, and the less Bible there is in your life the worse will be your life. Bible men are best men; Bible light is brightest light; Bible ways are safest ways; Bible faith is noblest faith; and Bible life is the purest life.

1. The Bible is the Book of No Mistakes. It is the only Book without a moral or spiritual mistake. It is the only Book of sixty-six books that is a harmonious whole, a moral mosaic built by many hands in different ages and in various lands. Man has been much of a moralist, yet with all of his moralizing by all of his philosophers in all the ages man falls far below the moral code of the Bible. Not only has man failed outside of the Bible to make a perfect code of morals, but man has ignominiously failed to live up to the code of his own creation. His own work mocks him! The Bible is the Book of the perfect plans, built on a perfect plan, and containing the perfect plan for man.

Consider this irrefragable fact: destroy all the books of all the libraries of all the ages and leave one Bible, and you have lost no light for life and labor. Or put it this way: Collate from all the multitudinous writings of man the moral codes and standards for character and conduct and leave me just one Bible and you will have less than I have! Before the New Testament Bible was written, the greatest philosophers failed to give to man the perfect standard of life; since this Bible is in our midst, man has signally failed to give to man a better standard, or to live up to this standard with the New Testament writings to go by. The Bible has been imitated but never duplicated. The Bible is the one uncopyrighted Book. It is anyman's Book and everyman's Book, yet no man's Book. There is no law protecting it nor forbidding any infringement on its writings. All men can draw from it, and do draw from it, for any and all purposes. Many criticize it, others strive to destroy it, not a few are indifferent to it, some deny it, but "the Scriptures cannot be broken." (John 10:35)

2. The Bible is the Book of Perfect Reason. The Bible is the only Book that gives a reasonable and comprehensive account of the creation of man and the universe. The more you study the accounts of the creative evolution of the hypothetical sciences of man, all are built on the shifting sands of assertion and surmise, two facts are realized: Man looms up as a failing pigmy before the problem of life and eternity, and the Bible is more and more being vindicated in its reason and revelation of light for the facts of life and its future. If the Bible had come to you saying, "In the beginning God made man out of a tadpole," you would have refused the Book with scorn: "God made man out of an amoeba," or, "God created man out of a bit of floating protoplasm," or, "A water worm decided to leave its habitat and become a dry-land being and by wiggling grew into a man," you would have rejected such a book as the vapid sayings of an idiot being. Imagine, if possible, what it would mean if we were called upon to worship such a protoplasmic god, the father of tadpole man!

If the Genesis account is wrong, as some sinful men have asserted and never proven, why is it that some man has not by the fine force of his superior intellect given to erring man a better account than that of Moses? Some affirm that that age was crude and chaotic, an age of ignorance and superstition. Then how do you account for Genesis?

3. The Bible is the Book with the perfect man in it. It is the one lone Book containing the throbbing portrait of the only perfect character in all history - Jesus Christ. The Bible is the only Book with a Man in it. Here is a stupendous fact that defies the explanation of mortal man, let alone the creating of such a character by the mind of man. It is to be noted that the world's greatest philosophers all wrote their philosophies before Matthew, Mark, Luke and John wrote their biographies of Christ, the sinless One and the selfless One. Man failed before this fact of revelation to create the perfect character, and with this revelation to go by, man has failed even worse since! He has failed to put into literature such a life with the illustration before him, and has failed to live up to the illustration of his own creation, let alone living up to the illustration given of God in Christ Jesus. Further, it is easily proven that the very best characters man has created in literature appropriated their finest traits and sayings from Jesus Christ. You believe in Cicero? There are more quotations from the New Testament Scriptures in Tertullian of the second century than of the writings of Cicero in all writers of three centuries. Do you believe in the most popular writings of antiquity, the poems of Virgil and Horace, the annals of Tacitus, and the orations of Cicero? You say "Yes!" Why? These writings you say you accept and believe in have not half the solid proof as to authenticated authorship as have the biographies of Matthew, Mark, Luke and John. Do you believe in these? If not, why not? No school of thought, be it rationalistic, materialistic, or socialistic, that can lay any just claim to scholarship, dare deny that Paul the apostle wrote the four epistles of the contention, Romans, First and Second Corinthians and Galatians. Paul was an eye witness and spoke of those things that he knew. I am persuaded Almighty God designed the Bible to stand upon its own merits and not by the testimony of the pens of men. Truly it is the lonely Book and stands alone as The Book.

4. The Bible is the Book of the Perfect God. It is the only Book that reveals to man a sensible and reasonable account of the Creator. Man's ideas of God are crude, cruel, and fantastic. Look at a few: "The First Cause." Think of praying to "O, Thou First Cause!" "God is law and law is God." Law is lifeless. Think of holding any communion with law! "Nature is God;" then go talk to a tree and get acquainted with God! God is not in a tree nor up a tree! This is bad enough, but think of the gods man has made where the influence of the Bible is absent. The paganism of Africa is appalling in the light of the Bible. Man left to himself is a polygamist and a polytheist, and in sin a polyglot! The Bible reveals to man, amid the blackness of sin, God as our Heavenly Father, a loving God, a just God, a suffering God, a sympathizing God, a merciful God, an all wise God.

5. The Bible is the Book of Perfect Love. Not only does the Bible reveal God as love, but the gift of His love; Jesus Christ, His only begotten Son, stands forth as the One lovable, loving Being, in all man's History. Before the Bible became the love of man was lust. In all the writings of man love looms forth as a thing based upon the flesh life. Plato's disquisitions on what purports to be love become drivel in the light of Paul's phillipic to the church of God at Corinth as found in the thirteenth chapter of his epistle. With that, the saying of Christ is, "Love your enemies, do good to them that hate you, bless them that curse you, and pray for them that despitefully use you." This is not of man for the world of man does not think that way, and here is one of the reasons man is found fighting the Bible. The lust of man is to kill his enemies, and not by any means love them.

6. The Bible is the Book of Perfect Prayer. The prayer wheel of the Tibetan is a fair sample of what man makes of prayer without the Bible. Prayer? Man knows not the meaning of prayer without the revelation of God as found in the Bible. The man of evolution knows not the privilege of prayer for such a theory leaves no place for prayer. Just as the Bible is God's means of talking to you, so prayer is God's means for You to talk to Him. Strange would be the child that never holds converse with his parent. A study of the prayers of Christ and the apostles reveals a wondrous working of this misunderstood and misused privilege and power. This age is in sore need of a New Testament revival of the practice of bent knee prayer.

7. The Bible is the Book of Promised Return. Here is thought that lies utterly beyond the mind of man. This Book reveals the death, burial and resurrection of the Sinless One who was made sin for man with the climax revelation that as He left so will He return. Jesus, the Sinless One, began His earthly life in a rniraculous birth. His earthly life was so lived as to make for history the outstanding miracle in character and conduct. His life ended in a miraculous going and must be consummated in a miraculous return. A sinless man is a life miracle completely foreign to the unaided mind of man. The raising from the dead of this Man is true to God's plan, and the return of this Raised Being is a revelation too colossal for unaided man to plan.

8. The Bible is the Book of Perfect Rule. It reveals to man the perfect rule for the individual life of man. Is is the only Book that brings to man the perfect plan for the government of man on Earth. The many plans of man for the society of, man have all failed or are failing. The aching fault with all of man's plans for the government of man is the failure to take into account - Man. The Bible reveals to man the government of grace for the growth of man in the goodness of God. Not until man becomes a new born being in Christ, circumscribed by the Lordship of Christ under the will of God will man be well governed within, and with peace, plenty, and contentment without. This is sustained by three pivotal facts that belong with peculiar force to the Bible, and the Bible only.

First: The authority of the purpose of the Bible. The purpose of God is the salvation of man from man, and from sin within.

Second: The authority of the Spirit of the Bible to make men selfless where man is selfish. Holiness in man for all the sons and daughters, of man. Man must be made right within before you can right the world without.

Third: The authority of the Fruits of the Bible, which is to make man live soberly, righteously, and godly, in this present world. Sober with himself, righteous in his relationships in all the walks of life, and like God in his mental processes and heart sympathies.

Open the Bible and "Let God be found true." Amen.