"But if ye will not do so, behold, ye have sinned against the LORD: and be sure your sin will find you out." Numbers 32:23 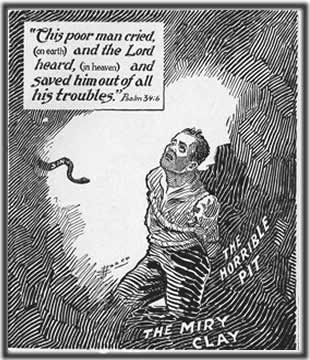 The speaker produced a stick with a lot of nails driven into it and said that it was meant to represent a life full of sin. Each nail represented a sin, and there were so many nails that not very much of the stick was to be seen.

This illustration was suggested to the speaker by the story of the boy who was so accustomed to telling lies that his father, wishing to call his attention to the great number of lies which he was in the habit of telling, told him to drive a nail into a post every time he told a lie. The boy did this and soon found that the post was full of nails. When he saw how the post looked it made him feel very badly. He had no idea that he had been telling so many lies. He came to his father and sorrowfully confessed his condition, and said that he wished to do better. Then his father told him that every time in the future when he told the truth, instead of telling a lie, he should pull out one of the nails. This the boy did, and soon returned to his father with the good news that the nails were all out again. "But," said he, "the holes are all left." His father told him that that was part of the price he had to pay for the sins he had committed.

The nails were then pulled out of the stick which the speaker had brought, and the holes were shown to the boys and girls who were present. The following lessons were then drawn from this story by the speaker: No matter how sorry we may feel for the wrong we have done, and no matter how much we may try to do better and make it right, there are certain consequences that a bad life will leave behind it.

If a man has been a thief, and makes up his mind that he will stop stealing in the future, and does really begin to live an holiest life, yet he will never be able to forget that he was once a thief. Many of the things which he did when he was a thief will come up before him at times and make him feel ashamed of himself. Many people who were injured by his wrongdoing may be suffering even then on account of his sin, and if he is really sorry for his past life it will make him feel very badly at times.

A boy was standing in front of a school house, during recess, when another boy threw something at him. It struck him in the eye and the boy who was struck lost the sight of that eye. That boy has lost the use of one of his eyes through the carelessness of the other boy, and thus has been injured for life. The boy who threw the stone may have been very sorry for what he did but that will never restore the eye to the boy who lost it. Even if the author of the accident should be able to offer the other boy millions of dollars that would not restore the eye.

Even the great Apostle Paul reproaches himself for the life he lived before he became a Christian, when he remembered how he held the clothes of those who stoned Stephen, the first Christian martyr. He says in I Corinthians 15:9: "For I am the least of the apostles that am not worthy to be called an apostle became I persecuted the church of God." Again in Acts 26: 9 he says: "I verily thought with myself that I ought to do many things contrary to the name of Jesus of Nazareth which thing I also did in Jerusalem; and many of the saints did I shut up in prison, having received authority from the chief priests, and when they were put to death gave my voice against them, and I punished them oft in every synagogue, and compelled them to blaspheme; and being exceedingly mad against them I persecuted them even unto strange cities."

Paul could not forget the things he did against God's people although he had repented of them and became a sincere Christian himself. Do you think that the Apostle Peter could ever forget that he had denied his Lord and Master with oaths and curses and said that he never knew Him? The memory of that act never left him as long as he lived. They say that when Peter was condemned to be crucified he asked to be crucified with his head down because he did not consider himself worthy to die as Jesus did, because he had denied Him.

We see from this that while we, may have our sins forgiven, yet what we have done, cannot be erased from our memories. It is a great deal better not to do the wrong than to do it even though we may be forgiven for it, because while we may be able to pull all the nails out of the post of our wicked lives, all the holes will be left.