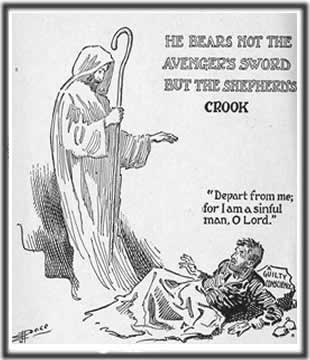 The long-suffering of God waited long until the cup of the iniquity of Sodom and Gomorrah was full, then He determined that fiery judgment should fall on the sinners. He sent two angels to save Lot and his family from the impending destruction. How unwilling they were to leave their home and friends even though terrible judgment was ready to burst upon them. The angels pled with Lot and urged him to hasten away with his family lest they be consumed. Yet they delayed and while Lot lingered, the angels laid hold upon his hands and upon the hands of his wife and daughters and brought them out of the city. "The Lord being merciful to him." Oh, the depth of the divine mercy! it was a love that would not let them go.

I wish to call special attention to those words, "While he lingered, the angels laid hold upon his hand." They pled and reasoned with Lot, they did all that words could do, and yet he lingered; then they went a step further and laid hold on his hand and brought him out of the danger zone. Thus was Lot saved.

God will never violate a man's free will, yet there is a place for Divine, Angelic Compulsion when words and persuasion fail. When a soul has been dealt with faithfully and is lingering in indecision, what he needs is not more words, but a loving, strong hand laid upon him, leading him out of the city of destruction, and placing him at the foot of the Cross.

We are too apt when dealing with souls to be content with words, and if they have nor the desired effect we say, "What more can I do?" God says, "pulling them out of the fire," Jude 23.

The angels hastened Lot, then laid their hands on him and pulled him out of the fire. I do not mean that this should be taken too literally, but there is a place for Divine Compulsion, which goes be-yond words; that holy thing we know too little of, and if we had more of it we would have more souls saved. Our lack of compelling power is caused by the lack of love. Those angels also believed in the coming judgment. We need clear and vivid views from Scripture of the nearness and reality of coming judgment, and then we shall have more compelling power.

In the parable of the great Supper, Luke 14:16, when the first invitation was met with excuses, and the second I invitation to the poor and blind only half filled the house with guests, the Lord said, "Go out into the highways and hedges and compel them to come in." If people see that it is the compulsion of love for their good they will usually obey; if it is the compulsion of self will they will rebel against it.

We need to learn more of this sacred and Divine loving compulsion, which goes beyond words. "Compel them to come in" is a Divine command. The master of souls knows that words alone are not enough, and He" calls us to compel them. May we ask Him to teach us what He means when He bids us "compel them." It is not so much a set of rules as the possession of a spirit; and if we have the spirit we will know how to respect the sinner's free will, and yet "compel him to come in."

If Jesus did not mean us to compel men He would not have said those words. May we not have lost souls on account of not having this compelling power?

A Christian man sometimes spoke mildly to his unbelieving brother about his soul, but with no results. Eventually the latter was saved apart from the believing brother; then he asked him, "Why did you not deal with me about my salvation when you knew my great danger?" His brother replied, "You remember that I have spoken to you in a way." "But you should have put me in a corner and not let me go until I came to Christ." This man wanted to be compelled to the Savior; and he would have counted it an act of real brotherly love. Many are wanting to be compelled in a loving way, but we are too much afraid they will resent it. Love can take liberties others cannot.

A wealthy family in New York City occupied a five-storied house. One day they discovered the house was on fire. There was some expensive furniture on the ground floor; the father and son tried to save some before the fire got down to it. They got one large piece of furniture to the door, and it filled the whole doorway; the father was on the outside and the son inside pushing it out. At last they saw that it was too large to go out, so they tried to push it in. To their horror they found it so fixed in to the doorway that it would not go out nor in, and the son was imprisoned near the roaring flames. The father became frantic; in a few minutes his son would be a cinder. Oh, that we could see the danger of lost souls as that father saw the danger of his son. We would then know what it means to compel them. The father went to a window in that room, but it had iron bars; he tried to break them, but they were too strong. The flames were enveloping his son, then with a cry to God for strength and a superhuman pull at the bars, he broke one and saved his son.