What Causes Homosexual Desire and Can It Be Changed?

Most of us fail to understand why anyone would want to engage in homosexual activity. To the average person, the very idea is either puzzling or repugnant. Indeed, a recent survey (1) indicated that only 14% of men and 10% of women imagined that such behavior could old any "possibility of enjoyment."

The peculiar nature of homosexual desire has led some people to conclude that this urge must be innate: that a certain number of people are "born that way," that sexual preferences cannot be changed or even ended. What does the best research really indicate? Are homosexual proclivities natural or irresistible?

At least three answers seem possible. The first, the answer of tradition, is as follows: homosexual behavior is a bad habit that people fall into because they are sexually permissive and experimental. This view holds rat homosexuals choose their lifestyle as the result of self-indulgence and an unwillingness to play by society rules. The second position is held by a number of psychoanalysts (e.g., Bieber, Socarides). According to them, homosexual behavior is a mental illness, symptomatic of arrested development. They believe that homosexuals have unnatural or perverse desires as a consequence of poor familial relations in childhood or some other trauma. The third view is "biological" and holds that such desires are genetic or hormonal in origin, and that there is no choice involved and no "childhood trauma" necessary.

Occasionally you may read about a scientific study that suggests that homosexuality is an inherited tendency, but such studies have usually been discounted after careful scrutiny or attempts at replication. No one has found a single heredible genetic, hormonal or physical difference between heterosexuals and homosexuals - at least none that is replicable. (9, 12) While the absence of such a discovery doesn't prove at inherited sexual tendencies aren't possible, it suggests that none has been found because none exists.

Two large studies asked homosexual respondents to explain the origins of their desires and behaviors - how they "got that way." The first of these studies was conducted by Kinsey in the 1940s and involved 1700 homosexuals. The second, in 1970, (4) involved 979 homosexuals. Both were conducted prior to the period when the "gay rights" movement started to politicize the issue of homosexual origins. Both reported essentially the same findings: Homosexuals overwhelmingly believed their feelings and behavior were the result of social or environmental influences.

In a 1983 study conducted by the Family Research Institute (5) (FRI) involving a random sample of 147 homosexuals, 35% said their sexual desires were hereditary. Interestingly, almost 80% of the 3,400 heterosexuals in the same study said that their preferences and behavior were learned (see Table 1 below).

While these results aren't conclusive, they tell something about the very recent tendency to believe that homosexual behavior is inherited or biologic. From the 1930s (when Kinsey started collecting data) to the early 1970s, before a "politically correct" answer emerged, only about 10% of homosexuals claimed they were "born that way." Heterosexuals apparently continue to believe that their behavior is primarily a result of social conditioning.

There is evidence that homosexuality, like drug use is "handed down" from older individuals. The first homosexual encounter is usually initiated by an older person. In separate studies 60%, (6) 64%, (3) and 61% (10) of the respondents claimed that their first partner was someone older who initiated the sexual experience.

How this happens is suggested by a nationwide random study from Britain: (17) 35% of boys and 9% of girl said they were approached for sex by adult homosexuals. Whether for attention, curiosity, or by force, 2% of the boys and 1% of the girls succumbed. In the US, (1) 37% of males and 9% of females reported having been approached for homosexual sex (65% of those doing the inviting were older). Likewise, a study of over 400 London teenagers reported that "for the boys, their first homosexual experience was very likely with someone older: half the boys' first partner were 20 or older; for girls it was 43 percent." (13) A quarter of homosexuals have admitted to sex with children and underaged teens, (6,5,8) suggesting the homosexuality is introduced to youngsters the same way other behaviors are learned - by experience.

It is remarkable that the three largest empirical studies of the question showed essentially the same pattern. A child's first sexual experiences were strongly associated with his or her adult behavior.

Kinsey reported "less homosexual activity among devout groups whether they be Protestant, Catholic, or Jewish, and more homosexual activity among religiously less active groups." (2) The 1983 FRI study found those raised in irreligious homes to be over 4 times more likely to become homosexual than those from devout homes. These studies suggest that when people believe strongly that homosexual behavior is immoral, they are significantly less apt to be involved in such activity.

Recently, because of the AIDS epidemic, it has been discovered that, relative to white males, twice as many black males are homosexual (14) and 4 times as many are bisexual. Perhaps it is related to the fact that 62% of black versus 17% of white children are being raised in fatherless homes. But even the worst racist wouldn't suggest that it is due to genetic predisposition.

Were homosexual impulses truly inherited, we should be unable to find differences in homosexual practice due to religious upbringing or racial sub-culture.

6) Many change their sexual preferences

In a large random sample (5) 88% of women currently claiming lesbian attraction and 73% of men claiming to currently enjoy homosexual sex, said that they had been sexually aroused by the opposite sex,

Homosexuals experiment. They feel some normal impulses. Most have been sexually aroused by, had sexual relations with, and even fallen in love with someone of the opposite sex.

It's a much different story with inherited characteristics. Race and gender are not optional lifestyles. They remain immutable. The switching and experimentation demonstrated in these two studies identifies homosexuality as a preference, not an inevitability. 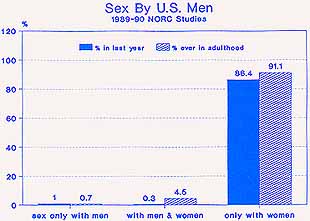 Many engage in one or two homosexual experiences and never do it again–a pattern reported for a third of the males with homosexual experience in one study. (1) And then there are ex-homosexuals - those who have continued in homosexual liaisons for a number of years and then chose to change not only their habits, but also the object of their desire. Sometimes this alteration occurs as the result of psychotherapy; (10) in others it is prompted by a religious or spiritual conversion. (18) Similar to the kinds of "cures" achieved by drug addicts and alcoholics, these treatments do not always remove homosexual desire or temptation. Whatever the mechanism, in a 1984 study (5) almost 2% of heterosexuals reported that at one time they considered themselves to be homosexual. It is clear that a substantial number of people are reconsidering their sexual preferences at any given time.

If homosexual impulses are not inherited, what kinds of influences do cause strong homosexual desires? No one answer is acceptable to all researchers in the field. Important factors, however, seem to fall into four categories. As with so many other odd sexual proclivities, males appear especially susceptible:

Can homosexuality be changed?

Certainly. As noted above, many people have turned away from homosexuality - almost as many people call themselves "gay."

Clearly the easier problem to eliminate is homosexual behavior. Just as many heterosexuals control their desires to engage in premarital or extramarital sex, so some with homosexual desires discipline themselves to abstain from homosexual contact.

One thing seems to stand out: Associations are all-important. Anyone who wants to abstain from homosexual behavior should avoid the company of practicing homosexuals. There are organizations including "ex-gay ministries, " (18) designed to help those who wish to reform their conduct. Psychotherapy claims about a 30% cure rate, and religious commitment seems to be the most helpful factor in avoiding homosexual habits. 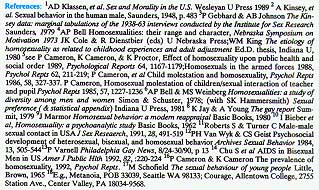 This educational pamphlet has been produced by Family Research Institute, Inc., Dr. Paul Cameron, Chairman. A complete report is available for a donation of $25 in the U.S., $40 foreign, postage included. Other pamphlets in the series include:

What Causes Homosexual Desire?
Child Molestation and Homosexuality
Medical Consequences of What Homosexuals Do

SAME SEX MARRIAGE: Til Death Do Us Part?