Gay activists regularly claim that they were "born that way" and thus cannot change their desires or stop their activities. Yet there are numerous documented cases in which homosexuals have changed. The Masters-Johnson Institute reported that: "A 25-year-old man had had his first sexual experience when he was 13 years old. It was arranged by his lesbian mother with an older gay man. After that episode, his imagery and interpersonal sexual experience were exclusively homosexual.... The man was motivated to establish a heterosexual life style because he was sincerely distressed by public disapproval of homosexuality and his personal loneliness. [After treatment, he] has been followed for 3 1/2 years. His sexual interaction has been exclusively heterosexual. He has moved out of the gay community and has changed... his life style."(1)

The answers to these seemingly "esoteric" questions matter a great deal. For one thing, the political stakes are high. The March 3, 1993 New York Times/CBS News Poll reported that a majority of those who believe that gays "cannot change" favored permitting homosexuals to serve in the military. Only a third of those who believed it is a choice felt the same way.

Many opinions about gay rights hinge on the question of whether gays are "born that way" and/or "can't change." For instance, 57% of those who believe it is immutable consider homosexuality an acceptable life style vs 18% of those who consider it a choice. But if homosexual activity is no more inevitable or unchangeable than drunkenness or drug use, most people seem willing to insist that homosexuals abandon their destructive behavior.

Two prominent 'homosexual' psychiatrists, examining the evidence of their own lives as well as those of others, came to different conclusions in this long-running debate. The first of these, Sigmund Freud, saw his homosexual urges as pathological. Through self-analysis, he overcame them and eventually rejoiced in the "greater independence that results from having overcome my homosexuality."(2) The second of these, Richard Isay, confronted his desires, pronounced them "natural," divorced his wife and joined the gay subculture.(3)

In 1992 Isay admitted that the "conviction among most, though not all, dynamically oriented psychiatrists in general and psychoanalysts in particular [is] that homosexuality can and should be changed to heterosexuality."(4) Yet, while acknowledging this consensus among his colleagues, Isay called attempts to change homosexual desire "the greatest abuse of psychiatry in America today." Why? Because the "attempt to change is extremely harmful."(3) Instead, society should change to accommodate homosexuality.

Dr. Isay, who chairs the American Psychiatric Association's committee on Gay, Lesbian, and Bisexual Issues, argues that homosexuality "is constitutional [that is, biological in origin]."(4) To support his position, he cited as proof two 1991 studies - the "gay brains" research of Simon LeVay(5) and the "gay twins" study of Bailey & Pillard.(6)

In 1993, Drs. William Byne and Bruce Parsons, researchers at the New York State Psychiatric Institute, critically reviewed "the evidence favoring a biologic theory" presented by LeVay and Bailey & Pillard.(7) They concluded in the Archives of General Psychiatry that "[t]here is no evidence at present to substantiate a biologic theory" of sexual orientation!

How could these researchers dismiss as inadequate the very studies that were fundamental to Dr. Isay's argument - and that even conservative columnist William- F. Buckley referred to in 1993 as proving that homosexuals are 'born that way?'

Byne & Parsons remembered that from the 1940s through the 1970s it was widely argued and believed in the scientific community that male homosexuals had a deficiency of male hormones. However, only 3 "studies had indicated lower testosterone levels in male homosexuals, while 20 studies found no differences based on sexual orientation, and two reported elevated testosterone levels in male homosexuals." In spite of these other studies, textbooks alluded to the supposed "fact" of hormonal differences for three decades. But this "scientific" belief was false.

Gay Brains: Byne & Parsons observed that the LeVay study was based upon a supposed functional correlation between the SDN-POA brain center in male rats and a brain center called INAH3 in humans. LeVay reasoned that since the SDN-POA had an effect on male rat crouching/mounting behavior, then a corresponding difference in the same part of the brain would make men homosexual. He assumed that the INAH3 in men was essentially the same as the SDN-POA in rats. But, as it turns out, the "effective lesion site within the anterior hypothalamus for disrupting mounting behavior [in male rats] lies above, not within, the SDN-POA. Thus, the SDN-POA does not play a critical role in male-typical behavior in male rats, and the correlation between its size and mounting frequencies clearly does not reflect a causal relationship." LeVay compared human brains with rat brains but failed to locate the analogous region. Instead of the "bullseye" that Isay and the mass media celebrated, it was an embarrassing miss!

LeVay's study also had numerous technical problems. For instance, his samples included 19 brains of gays who died of AIDS and 16 brains from men whose sexual orientation was unknown. He assumed the 16 were heterosexual, even though 5 had died of AIDS. More importantly, although LeVay argued that a small INAH3 "caused" homosexuality, some of the gays had an INAH3 that was larger than the average size of the INAH3 of the "heterosexuals," and some of the "heterosexuals" had an INAH3 that was smaller than those of gays. So some of his gays "should" have been heterosexual and vice-versa.

Gay Twins: Bailey & Pillard reported that 52% of identical twins of homosexuals were also homosexual. But after the media finished hyping Bailey & Pillard's results, King & McDonald(8) published a new 'sexual orientation of twins' study, which found concordance rates for homosexuality of 25% in identical twins. That's half the 52% reported by Bailey & Pillard. Drs. Byne & Parsons noted the large proportions of identical twins in both studies "who were discordant for homosexuality despite sharing not only their genes but also their prenatal and familial environments... [which] underscores our ignorance of the factors that are involved, and the manner in which they interact, in the emergence of sexual orientation."

The evidence supporting the "born that way" claim of Isay and other gay activists is tenuous. It has been uncritically accepted and hyped by the media and some less-than-careful researchers. But it hasn't been replicated by others and is riddled with technical problems.

On the other side is a body of scientific evidence that suggests that homosexuality is adopted by people who are confused, sexually adventurous and/or rebellious. This evidence suggests that sexual orientation is flexible, not immutable. And the evidence comes from the largest studies on the subject, conducted by researchers on both sides of the gay rights debate.

Unlike biological changes, the shifts in sexual orientation began at age 18 or later for half of both gays and lesbians. Sexual changes, five or more years after puberty, are exceptionally late and without biological precedent in development. But changes in tastes (e.g., food or entertainment) often take place around age 18.

Other Evidence
The same Kinsey study also produced other evidence that can not be explained in terms of biological determinism, but would readily support the idea that choice is involved in sexual orientation and behavior:

Consistent with these results, the Family Research Institute (FRI) 10 conducted a nationwide random survey of 4,340 adults drawn from 5 U.S. cities in 1983 and found:

These are the kinds of sexual choices one would expect from the sexually adventurous or confused. Unless Dr. Isay and his supporters are willing to believe that people are "born" to fall in love, get married or to have sex with animals, some measure of choice, rather than biological inevitability, must have been involved.

The ability to change explains the FRI findings that:

People Can Change
Where is the "biological inevitability" or "immutability" in these findings? The evidence suggests that people can modify their sexual tastes. The FRI survey in Dallas,(11) similar to the Kinsey survey in San Francisco, found that 1% of heterosexual females and 3% of heterosexual males at one time considered themselves homosexual (i.e., were ex-gay when interviewed).

And a survey of 50 wives who had no homosexual experiences or interests up to age 30, but who participated in homosexual sex acts as part of "swinging" (where married people swap partners) reported that all of these women eventually considered themselves to be bisexual.(12)

These are among the findings that seriously challenge the claim that sexual orientation is predetermined before or after birth, or even that it is permanently fixed in adulthood.

What is at Stake?
If sexual orientation is actually a matter of choice like drug use, we can expect that more of our youth will try homosexuality the more that it is tolerated and encouraged. Along these lines, Dr. Christopher Hewitt's(13) analysis of the frequency of homosexuality in various societies is summarized in the Table: societies that accept homosexuality have more of it and those that disapprove of and punish it have considerably less of it 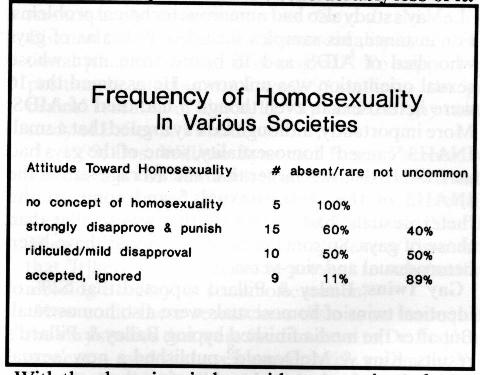 With the above in mind, consider our society's future in light of D. Minkowitz's December 29, 1992 editorial in the national gay magazine, The Advocate:

"I am increasingly impatient with the old chestnut that our movement for public acceptance has not increased and will not increase the number of gay men and lesbians in existence. `There are more of us than there used to be,` historian John D'Elmilio has written. Firmly believing this, I wanted to... argue the morality of teaching kids that gay is OK even if it means that some will join our ranks...."

Indeed. Youth are often attracted to excitement and rebellion. The gay movement is growing.

Minkowitz also argued that the 'born gay' claim is nothing more than a smokescreen: "most of the line about homosex[uality] being one's nature, not a choice, was articulated as a response to brutal repression.... 'We didn't choose this, so don't punish us for it!' One hundred years later, it's time for us to abandon this defensive posture and walk upright on the earth. Maybe you didn't choose to be gay - that's fine. But I did."

Perhaps those who commit adultery, molest children or practice homosexuality are "born with" unusual biological influences. But there is no hard evidence of this. In fact, it appears that participation in these activities, like drug abuse or any other chosen behavior, is a combination of will and opportunity. No matter how such desires come about, members of society are rightly expected to control their behavior and not endanger others.

This educational pamphlet has been produced by Family Research Institute, Inc., Dr. Paul Cameron, Chairman. A complete report is available for a donation of $25 in the U.S., $40 foreign, postage included. Other pamphlets in the series include:

Back to top of this page