By Terry Watkins of Dial-the-Truth Ministries

Dial-the-Truth Ministries is a resource, tract (both electronic and printed) and evangelistic ministry. Our purpose is presenting the truth and exposing error with the light of the Word of God, (with emphasis on The King James Bible, prophecy and Christian music), and reaching the lost with the glorious gospel of the Lord Jesus Christ. We stand on the sole authority of the King James Bible (AV 1611). 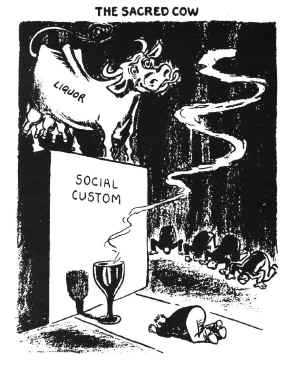 Who is the king of the drug world?

Who claims 50 times more lives than all the illegal drugs combined? Who costs the American people 130 billion dollars every year to mop up it's blood-bath of human slaughter? Who destroys 1 in every 4 families in America? Who kills over 200,000 Americans each year? Is it crack? Is it cocaine? Could it be heroin?

No, the undisputed heavy-weight champion of the drug world and number one killer of Americans is KING ALCOHOL!

And nobody dares utter a peep!

THANKS TO KILLER ALCOHOL . . .

And one of the most disturbing statistics of all - 60 PERCENT OF ALL CHILD ABUSE IS DUE TO KILLER ALCOHOL!

Let's wage a war on crack, on cocaine, on heroin, and marijuana! BUT DON'T DARE EVEN MENTION KILLER ALCOHOL!

During the Viet Nam war, 57,000 Americans gave their lives fighting for this country. A wailing wall was built in Washington with each soldiers' name engraved. But in that same 9-year period, when 57,000 died in Viet Nam OVER 2 MILLION AMERICANS were killed by killer alcohol! During the Viet Nam War, thousands of protesters were all over this country. What I want to know is where are the protesters against killer alcohol?

WHERE IS JANE FONDA WHEN WE REALLY NEED HER?

Nobody opens their mouth against killer alcohol! Nobody makes a sound! Who speaks out for over 7 million young children that live a life of child abuse, incest, and torture? Their little life is a hell on earth because of killer alcohol!

THE KILLER IS GLAMORIZED AND GLORIFIED!

The alcohol industry spends over 400 million dollars a year advertising and glorifying the killer! By age 18, American children on an average, have seen an estimated 100,000 beer commercials! They innocently watch as their favorite heroes glamorize and glorify killer alcohol. "You only go around once in life, so grab for all the gusto you can", they proclaim. But what they don't tell you is - every single day - at least 10 young people die because of drinking alcohol! God have mercy on these athletes, who prostitute their God-given athletic ability, sacrificing our young people on the altar of alcohol!

One of the beer commercial's favorite celebrities was Billy Martin, former manager of the New York Yankees. I bet you never saw a picture of the end of the drinking scene. Here's the real picture! After spending most of Christmas day at the local bar drinking, Billy and William Reedy, a Detroit bar owner, headed home. As they were driving home their pickup truck skidded over 200 feet off a winding, country road, then traveled another 100 feet down a four-foot-deep gully before striking a concrete culvert. Billy Martin smashed through the windshield, fractured his neck and was pronounced dead 23 minutes later.

BET YOU NEVER SAW THAT PICTURE!

But, wouldn't that make a good "Lite" beer commercial! Wouldn't that really show you "Miller Time"?

NO, THEY WON'T SHOW YOU THE END OF "HAPPY HOUR"!

Killer Alcohol is turning our highways into rivers of blood and our interstates into a slaughter-house! On the average, every 50th car you see is powered by a drunk driver on their way to murder an innocent victim! Nearly 700 a week will be killed, 100 a day, nearly 5 an hour - every 12 minutes somebody is killed by a drunk driver! Over 25 million Americans have died in traffic accidents because of alcohol. People ask what are we going to about AIDS? What I want to know is - what are we doing about those thousands of innocent people who are "LAMBS LED TO THE SLAUGHTER" on the highways across America by a drunk driver!

IN JUST ONE YEAR, alcohol will slaughter more Americans on our highways than all the American soldiers killed in World War II!

Some gullible parents are actually relieved that their children are drinking alcohol instead of using other drugs. But, what many parents don't know is - the number one killer of young people between the ages of 16 and 24 is ALCOHOL-RELATED AUTOMOBILE ACCIDENTS!

THERE'S A KILLER STALKING THE HIGHWAYS OF AMERICA!

The President and Congress have spared no expense, nor effort, to"to get guns off the streets." From "20/20", to "48-Hours", to the local news - you can't turn on the television, without hearing the horror of "guns and youth." Where are the "TV specials" on killer alcohol? And what's more, in nearly all youth related shootings - killer alcohol helps"pull the trigger". As one youth convicted of attempted murder, said, "most of the times we didn't think about planning drive-by shootings, 'cause we had all been DRUNK."

A 16-year-old in Buffalo, N.Y. kills his father after drinking some beers with friends . . . A drunk father in South Carolina, cuts off the head of his baby. In jail, he's screaming, "How? How could I do such a thing? I loved my baby!" . . . A drunk husband pours gas on his wife and then sets her on fire. In jail, he's crying, "Why? What came over me? I loved my wife!" . . . Cari Lightner, a 13-year-old girl killed by a drunk driver, as she walked to a church carnival . . . 4 year-old, David Gunderman run over by a drunk driver as he stood on the sidewalk waiting for the ice cream man

ONLY THE NAMES CHANGE!

The President and Congress, have repeatedly called to our attention, the country's large deficit. But what they don't tell you - killer alcohol costs tax payers over 130 billion dollars each year to mop up it's massacre! Wouldn't that go a long way in balancing our budget? Not even to mention the thousands of lives, homes, and marriages we'd salvage! No, let's cut back military! Let's cut back social security! Let's raise taxes! But don't dare do anything to halt killer alcohol!

Do you know what city has the highest per capita consumption of killer alcohol? YOU GUESSED IT! WASHINGTON, D.C.!

Killer alcohol can make an otherwise, faithful man or woman forget their marriage vows. Currently, 2 out of every 3 marriages end in divorce - and 2 out of every 3 adults drink alcohol! A Miami judge recently"shocked" the news media when he stated that a WHOPPING 90% OF ALL DIVORCES WERE CAUSED BY DRINKING PROBLEMS!

Killer alcohol has destroyed our homes!

Mental illness and the homeless is in epidemic proportions in America. A panel of 20 doctors and scientists was asked in Pageant Magazine, what is the greatest single cause of insanity in the U.S.? THEY ALL REPLIED WITHOUT EXCEPTION - ALCOHOL!

You've heard it said, one or two drinks won't hurt you, or an occasional drink may even be good for your health. NOT ACCORDING TO THE LATEST RESEARCH! An article in U.S. News and World Report states, "Alcohol begins to alter the functioning of virtually every organ from the moment it enters the body. . . experts believe even OCCASIONAL DRINKS CAN BE DANGEROUS." According to studies, you have at least a 1 in 10 chance of becoming an alcoholic with each sip! Research states, "Everytime you take a drink you are playing RUSSIAN ROULETTE! Any given "sip" you may pull the switch that will change your metabolism and turn you into a chronic alcoholic and destroy your life."

And 1 out of every 10 alcoholics commit suicide!

YOU'D BETTER THINK ABOUT THAT BEFORE YOU TAKE THAT "OCCASIONAL" DRINK!

The Bible gives a perfect description of alcohol in Proverbs 23:"Who hath WOE? Who hath SORROW? who hath contentions? who hath babbling? who hath wounds without cause? who hath redness of eyes? THEY THAT TARRY LONG AT THE WINE; they that go to seek mixed wine. Look not thou upon the wine when it is red, when it giveth his colour in the cup, when it moveth itself aright. At the last it BITETH LIKE A SERPENT, AND STINGETH LIKE AN ADDER. Thine eyes shall behold strange women, and thine heart shall utter perverse things."

The Bible says, ". . . at last it biteth like A SERPENT." Do you know what a serpent bite is? POISON! Did you know that alcohol is poison? Every major organ in your body is poisoned by alcohol. According to The Birmingham News (Nov. 19, 1990), "Scientific data show alcohol is THE MOST PHYSICALLY DETERIORATING drug there is. It causes more organic damage than any other drug. . ."Why is it when people get drunk, they have a tendency to vomit? Because your stomach knows POISON when it comes down! No wonder the bartender says, "NAME YOUR POISON"! When a man is drunk, he is INTOXICATED. Do you know what a TOXIC is? IT IS A POISON! A drunk man is a man who has LITERALLY POISONED HIMSELF!
Scientists have only recently discovered the physical process that creates the slurred speech and drunken stupor. Once in the blood stream, alcohol causes a coagulation of the red corpuscles referred to as "sludging". The blood thickens so that it cannot flow freely and clogs the metabolic exchange of life-giving oxygen. And when cells are deprived of oxygen - THEY DIE! And because brain cells require a high oxygen supply continuously, they are particularly vulnerable! And brain cells are the only cells that do not reproduce! Brain cells destroyed are never replaced! Autopsies performed on drinkers, often reveal hollow cavities in the skull, where ENTIRE CONVOLUTIONS OF THE BRAIN HAVE DISAPPEARED! And according to studies by Dr. Melvin H. Kinsley, brain damage occurs progressively from THE VERY FIRST DRINK! The next time you see that man staggering drunk - YOU ARE WATCHING A MAN LITERALLY DESTROYING HIS BRAIN!

I've had people tell me several times, Jesus drank wine. . . The Bible makes a clear distinction between fermented liquor and new wine, or grape juice. Speaking of fermented liquor, Proverbs 23 says, "Look not thou upon the wine when it is red (speaking of fermentation), when it giveth his colour in the cup, when it moveth itself aright (speaking of the bubbling and carbonation). At the last it BITETH like a serpent, and STINGETH like an adder."

A description of new wine is found in Isaiah 65:8, "as the NEW WINE is found IN THE CLUSTER." Not in a bottle! You can't get FERMENTED LIQUOR from a CLUSTER! Fermented LIQUOR is placed in a bottle, with yeast and allowed to FERMENT. Genesis 40:11 gives a clear picture of new wine, "I took GRAPES and PRESSED them in Pharaoh's cup."

People say, Jesus drank wine at the Last Supper with the apostles. HE DID? In Matthew, Mark and Luke where the account of the Last Supper is found, the word "wine" is never even mentioned. The Bible very carefully says they drank - "FRUIT OF THE VINE!"

What about when Jesus turned the water into wine at the marriage in Cana. If Jesus Christ turned water into fermented liquor, he directly disobeyed Habakkuk 2:15, "Woe unto him that giveth his neighbour drink, that puttest thy bottle to him, and makest him drunken also . . ." And, if Jesus disobeyed Habakkuk - HE WAS A SINNER! The Bible makes it very clear in 1 Peter 2:22, 2 Corinthians 5:21, and other verses - THAT JESUS CHRIST WAS WITHOUT SIN!

God has placed a very strong warning in 1 Corinthians 6:9-10, "Be not deceived: NO DRUNKARDS, . . . shall inherit the kingdom of God."

IS ALCOHOL WORTH IT?

Friend, alcohol will never satisfy that unquenchable thirst, burning inside of you.

ONLY JESUS CHRIST CAN QUENCH THAT THIRST!

Why don't you let the Lord Jesus Christ satisfy that thirst in your soul today? OH, HOW HE LOVES YOU! He's been waiting for you a long time, friend.

Why don't you trust him this very minute?

You'll never regret it! You may not have a drinking problem. But, if you've never trusted Jesus Christ, there's a unsatisfied thirst and longing in your soul - and YOU KNOW IT! The Bible says in Proverbs 27:20, ". . . the eyes of man are never satisfied."